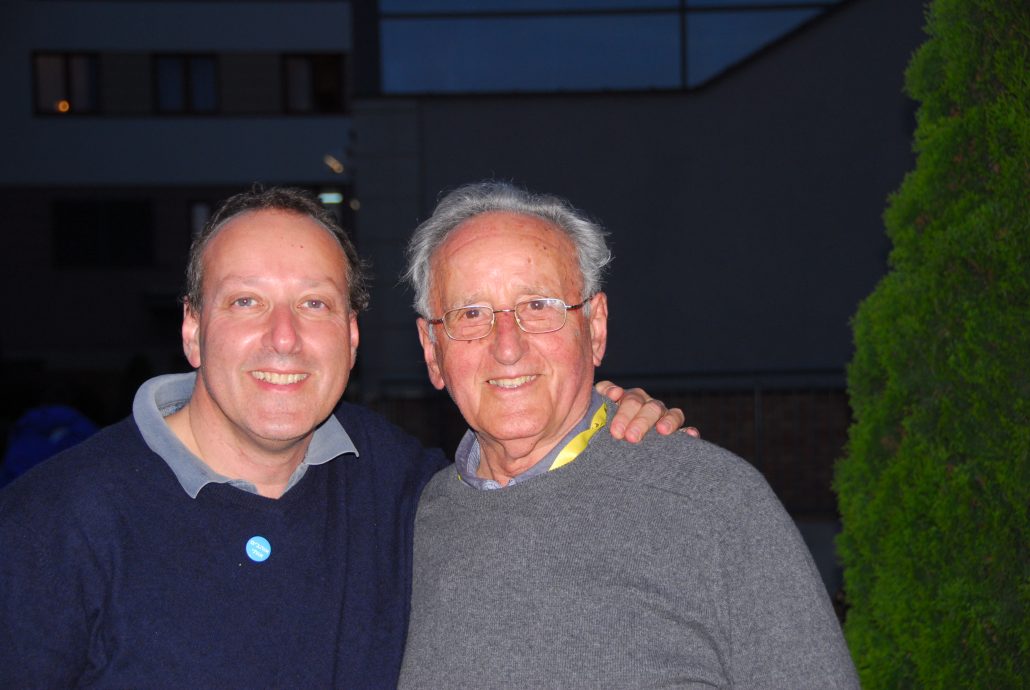 I wrote this back in 2014 after visiting visiting Auschwitz with my father. He hasn’t returned there since being imprisoned there as a 13 year old boy during the second world war. His mother, father and 7 brothers and sisters were all murdered there. So much of my work now is to help clients understand their own backgrounds and the impact of a dysfunctional family of origin. I find writing and putting this stuff out there helps break the taboo in my family of origin of letting the world know were are not a healthy functional family. Maybe it will help others.

I woke at 1 am last night after yet another nightmare. I’ve had recurrent nightmares for as long as I can remember. I had night terrors as a young boy. They always involve dark negative entities, witches, monsters, ghosts that are trying to get me. Last night’s was one of the worst. I woke up screaming feeling such visceral fear that words don’t encapsulate my feelings. Every fibre of my being felt invaded by terror. The fear of being annihilated. Sleep did not return to me easily last night. I lay in bed and raged that once again my father’s inability to deal with his own feelings bears its burden in the trans-generational trauma that I carry.

There is no coincidence me dream was preceded by me meeting my dad for lunch yesterday. I haven’t seen him for 4 months. I’ve purposely been keeping a low profile as I’ve increasingly noticed that I somatise after seeing him. My knees and ankles become inflamed, causing me much pain for weeks at a time. I’ve been pain and nightmare free since I last saw him. Over the past two years we have both been working at rebuilding the bridges between us. Perhaps that should be building the bridges, as they were never laid down when they should have been – whilst I was growing up. With the help of therapy and more latterly, the men’s work through the ManKind project, I have been able to have more honest conversations with him about my feelings.

I was raised in a family where feelings were not allowed to be expressed. My three sisters and I were raised with many dysfunctional beliefs, one particularly pernicious one being “don’t do anything to upset your father, he’s suffered enough” – his torment being at the hands of Nazi persecution. So even now, when I have the temerity to tell him about his less than staller fathering, it feels viscerally like I am doing something very wrong. I recognise this is my inner child who is expecting to be punished for speaking out.

Yesterday’s lunch started as it always does, with superficial stuff. I wasn’t going to raise the issue of my withdrawal unless my father asked. After 20 minutes he asked about the men’s work I am doing, what’s involved? Who goes along? Do I get paid for it? I explained its about learning how to be a better man, to live a life with integrity, honesty and taking responsibility, how to be a better father to my daughters and a better husband to my wife, how to feel safe amongst other men that don’t judge me and to help me get more connected to my feelings.

He then asked about us, our relationship. I asked if he wanted me to be honest? He said “I want to know why you are angry, why cant you just leave things be but don’t tell me anything that I might find hurtful”. How’s that for a double bind? I told him I cant predict if he will find what I say hurtful All I can do is talk about how I feel, to take responsibility for my feelings and I that cant be responsible for his reactions. If he doesn’t like what I say, then that’s for him to reflect upon and take to his own therapist he sees at the Holocaust Survivors Centre.

He tells me he gives his therapist therapy such is his sceptism of the effectiveness of talking therapies. What was said between us was little different to what we spoke about a year ago, although this time I also reinforced my appreciation of the things he has done for me and also how I am starting to gain respect for some of his behaviours. We agreed to disagree on many things, his belief that parents deserve the respect of their children irrespective of how they behave, that children have a duty to be there for their parents come what may and that having children is a two way street.

My beliefs are very different, a parent has to earn the respect of their children, its not a child’s duty to carry their parent’s emotional baggage and having a child is a one way street where our children own us nothing. We as parents decide to bring them into this world and that comes with lifelong responsibilities of being that child’s parent.

He cant understand that whilst he now accepts he was not the best of fathers why cant I just sweep my anger I hold over the past under the rug, let sleeping dogs lie. He wants me to forget the beatings at the hands of my mother whilst he stood passively by. I explained that by doing that, I just push my feelings back into my shadow where they will continue to impact my behaviours. And having done that for 53 years, I’m no willing to do that, to save his feelings and to let the world believe we are a perfectly normal happy functional family.

The reality is I come from a narcissistic family of enmeshed co-dependent love addicts.  I am being used as the scapegoat that needs to be told what I am doing is wrong, that finding my voice is not appropriate. Maybe my dad sees me as being mentally unwell?  something he and my mother felt when I was 7 when they took me to a psychiatrist to label me as the one that was sick so they did not have to look at their inadequate parenting.

Our last conversation 12 months ago did not end well. Whilst the content was similar, I was less able to contain my anger. I told him then that he failed me as a father emotionally. He provided for me materialistically but I had no emotional templating on how to transition from a boy to a man. My dad has been emotionally absent all my life.

My father plays the victim, one of the most malignant ways to get our needs met. Last year he went back to my sisters and told them he was left feeling worse after our meeting than how he felt after the Nazis murdered his 7 brothers and sisters and parents. The drama triangle of the victim, rescuer and persecutor, which is so common in narcissistic families kicked in, my dad seeing me as the persecutor, he reverts to playing the victim, my sisters move to rescue him by trying to persecute me.  when i confronted him about his crass statement, he said he didn’t say Nazis, he said the Germans!!!!

The only way to deal with the drama triangle is to get off it, which is what I did last summer, breaking all contact with my family of origin for a few months. I told my father there would be similar consequences this time around, if he felt the need to try and manipulate my sisters into siding with him. I told him in my book, that’s where part of the sickness lies in our family, with the enmeshment of a parent involving other siblings when there is disagreement between parent and a child. Its one of the few times I’ve seen my father get angry. He was caught between a rock and a hard place, wanting to maintain contact with me and also wanting to get my sisters to feel sorry for his hurt feelings because at last I had found my voice. In that moment I lost my centre, my feeling of being grounded and became furious as I saw my father’s attempted manipulation in that moment.

We covered much ground in this conversation, with no real new territory apart from the physical manifestation of my emotions. I spoke of how I felt last year with his comment about my behaviour as compared to the Nazis. His version was it was a measure of how hurtful he had found my honesty. I asked him what I had said then and also during this meeting that he found hurtful, so brutal, so destructive? He could not tell me. All he said was he finds my honesty hurtful as I’m insensitive and inconsiderate to his feelings and that makes me selfish. Its why he hates the journey I am on, because I am one of the few if only person that has the audacity to challenge his beliefs.

My father talked about how sad he felt about how I felt towards him. I said that’s OK, why wouldn’t he feel sad? I told him I too feel sad that I’ve failed my own daughters in my own inadequate fathering, something I’m trying to make amends with through the work I’m doing to grow. I told my father I’m no longer prepared to sugar coat things and tell him what he only wants to hear. Its another point we agreed to disagree on. He chooses to remain a co-dependent people pleaser to avoid conflict. The adult intellectual part of me understands where this needs comes from. My inner child did not. All I knew was growing up in my family did not feel safe, secure nor loving. I did not feel seen, validated, nor accepted for who I was. My mother was a rageaholic and my father did not protect me from her abuse. There was also much religious hypocrisy that has left me with a distaste for organised religion.

I told him there is nothing he can do for me. I am no longer seeking his approval and now on my own path to individuation. This is my work for me to do. If he does not agree with my life choice’s, I cant help as I no longer feel it’s  a child’s duty to subjugate their feelings to keep a parent happy.

Even in writing this article feels in some way like a betrayal of the family system I was raised in. “dont upset your father….” My father’s desire to project out the image of the perfect loving caring family is being challenged. And if there is one thing for sure that is guaranteed to elicit narcissistic rage is for someone to defy their belief system.