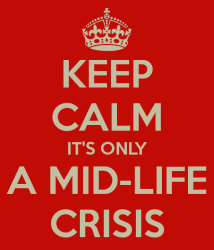 A mid-life crisis, transition or transformation is usually experienced around the age of 40 plus or minus 20 years. One of the first to write on the subject was the psychologist Carl Jungwho struggled in his own mid-life and came up with the term individuation – the path towards wholeness, the journey to the Self at the core of one’s being and is felt to be a normal part of the maturing process.   Not all people experience this transition but for some, a midlife crisis is very apparent and can be an uncomfortable time emotionally which may lead to significant psychological upheaval. Those who struggle with this transitional stage might experience a range of feelings such as:

It is common to see external factors acting as a catalyst and driver for change. Such events might include debt, loss of a loved one, breakup of a relationship, loss of a job or children leaving home with loss of role for the child carer. Woman also endure a midlife transition – perhaps even more so because of hormonal changes. Some differences between the male and female mid-life transition include:

So, while many midlife women are yearning to be free whilst their male counterparts are lamenting “I just want to find me”. The term “Midlife crisis” is still much maligned and derided in mainstream culture. The less compassionate feel it is used as an excuse for middle aged men to purchase a fast red sports car, ditch their careers and elope with a woman young enough to be their daughter.

“The middle passage is an occasion for redefining and reorientating the personality, a rite of passage between the extended adolescence and our inevitable appointment with old age and mortality. Those who travel the passage consciously render their lives more meaningfully. Those who do not, remain prisoners of childhood, however successful they may appear in outer life.” James Hollis – The Eden Project – In search of the magical other.

The middle passage is a modern concept. Until a few generations ago, life expectancy was little beyond what we now consider to be the commencement of mid-life, around 40-50 years old. But its not just increasing life spans that allows for contemplation in this part of life – increased living standards and accumulated wealth means that for an increasing number, the lower levels of the personal hierarchy of needs (Maslow 1943) are satiated, allowing progress towards what appears to be an innate human drive for self-actualisation.

Given the average male in the West now lives into their late 70’s, we can see how the ego goes through various phases of maturation that extend far beyond the early stages of life and into adolescence. Ancient cultures had their myths, rituals and wise elders to guide others through not only the initiation from boyhood into manhood but also other phases of difficulty. In our Western egoic patriarchal culture, we have lost these Rites of Passage or they have become diluted to fit in with modern standards and norms.

With the dawning of the middle years we have the realisation that we have less years ahead of us than are behind us. Our physical vitality starts declining and our biological drives of procreation, family raising and providing has by and large completed. We have a dawning of what next? Existential questions such as meaning and purpose (Yallom 1980) may start to invade our minds, we develop a restlessness for change, to find something more than just being on the hamster wheel of working until we are 65 and then retiring to an uncertain future with a finite lifespan.

And yet, within this tumultuous transition, our egos are defending against these life changes and it compensates by grandiosity. This delusion of greatness keeps at bay our darkness, we resist looking into our shadow. The ego also yearns for the perfect relationship. It hangs onto the early fairy tales and archetypes of “if only I could find the ideal partner, my life would be perfect”. As we enter midlife, we start appreciating relationships are difficult and few if any couples have the perfect relationship and yet we delude ourselves into thinking we are different and we can find our “magical other”. And so comes along another realisation of the middle passage: that intimate relationships have their limitations, that no one other person can meet all our needs. We project all our wants and desires onto our partners and with time we appreciate they do likewise and they too are full of vulnerabilities and fears.

And so midlife is a time when inordinate pressures are placed on marriages and many do not last the course. We are projecting our unconscious childhood needs on the other and these grandiose desires rarely can be met, leaving us feeling abandoned, rejected and betrayed. We project what is unclaimed or unknown within us. Life erodes these projections and we start appreciating we have to be accountable for this and we are the only ones that are responsible for our own contentment.

James Roberts  in his 1998 book “Crossing the Soul’s River describes the transition to greater consciousness in the middle passage as only being obtainable by addressing what he calls the four soul tasks:

Murray Stein formulated three main features of the midlife crisis in order to transform and for a passage to deepen self-awareness.

My own experience of my midlife crisis emulates what these two authors postulate. My own precipitating crisis of meaning and purpose, the breakdown of my persona – my false self, discovering my shadow through infatuation and psychotherapy and currently going through a phase of integration and increased consciousness.

Thanks for reading about Mid life transition and mid life crises at loverelations.co.uk!